Horace Wells M.M. and the Battle of the Boar's Head

My Grandfather, Horace Wells, was born and brought up at Dew Farm and Tillingham Farm between Rye and Peasmarsh. When a young lad he was a member of Peasmarsh Brass Band. He went off to war in 1915, to join the Royal Sussex Regiment which was recruiting in Bexhill - presumably he travelled by train having walked to Rye Station from Tillingham. 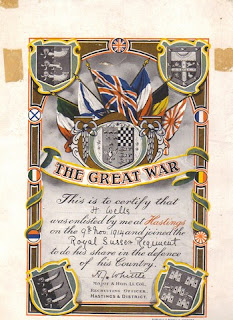 We know he was a bandsman in the Royal Sussex, and that the bandsmen were, in the field, stretcher bearers and first aiders. This photo dates from 1910

This is the whole band from which the above was pinched 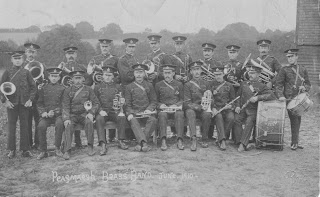 ﻿
After training at Whitley Camp in Surrey, Horace went to France via Dieppe with the Southdowns Battalions of the Royal Sussex, that is the 11th, 12th, and 13th

For a full account of what became of the Southdowns, I recommend you visit this webpage -

The idea of the Battle was to cut off a corner of the German front line and hoodwink them into thinking the main attack wasn't going to be on the Somme - wrong!! Suffice it to say that Horace was uninjured in the Battle, though like everyone else he was mentally scarred, and distinguished himself in no-man's land afterwards - this is the citation for his Military Medal. His daughter told us how he rarely spoke about the horror of picking pieces of his chums up off the battlefield and from the barbed wire

The Brigadier General Commanding has much pleasure in announcing to all ranks of the Brigade, the following Awards for gallant conduct, on the morning of 30th June 1916, during the attack on the Boar’s Head trenches, in front of Richebourg St. Vaast
LANCE CPL. H. WELLS
Royal Sussex,
Tillingham Farm,
Peasmarsh.

Awarded military medal for gallantry and devotion to duty in action, June 30th.

(1) This NCO(a stretcher bearer) worked unceasingly for several hours, doing most excellent work among the wounded in the Front Line and No-Man’s Land. The heavy artillery fire made it very difficult to do this work, but L/Cpl Wells would not give up although severely shaken. His bravery was an inspiring example to his comrades

Note – in the original citation slip found with the medal, the section underlined above had been deleted, presumably by a censor 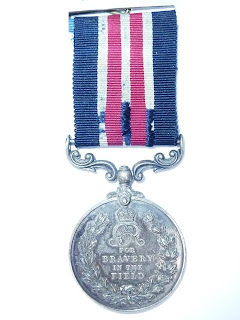 The family have kept the newspaper cutting announcing the award, and we still have it 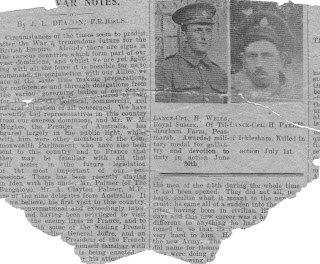 Compare the photo of the young recruit above with one of him a few years after the War, when he still shows the strain of his experiences 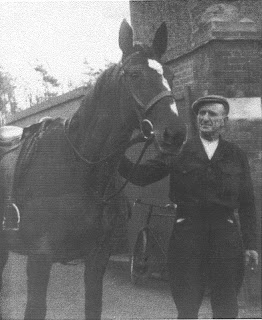 ﻿
After the Battle the regiment was so decimated it was disbanded, and we know from letters home we still have that Horace was put into a band to travel the war areas and entertain fellow troops, including, according to one letter a spell in Germany in 1919 near to Siegen

We first visited the site of this infamous Battle in the 1990's, when I made these photos of the front line 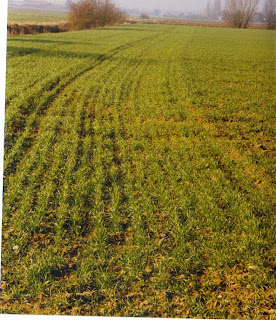 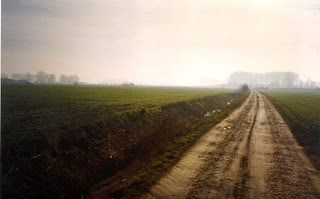 How flat and open the place was in those days we can only imagine, but in recent years we became aware of the Royal Sussex Living History Group, and that there has been an annual commemoration ceremony at the principal War Grave at Richebourg St. Vaast, followed by a similar ceremony at the village's own War Memorial, through the good offices of the Mayors of Richebourg and Aubers. We have attended for the last 4 years on the nearest Saturday to the date of the Battle

Here are some photos to show the Commemoration in past years, and the Royal Sussex Living History Group contribution to the ceremony, which is always very moving indeed 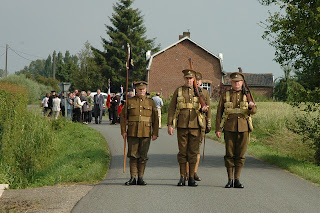 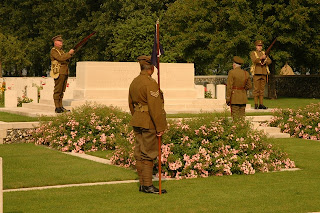 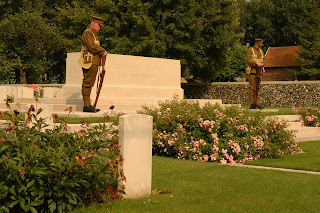 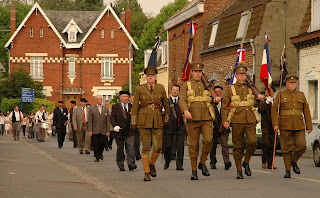 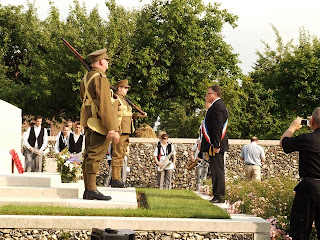 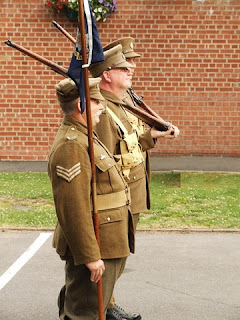 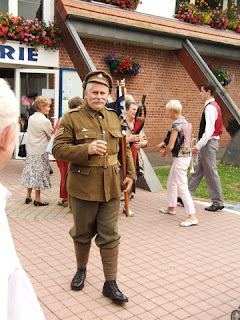 A well-earned glass of orange juice! Boy was it hot that year

This year (2011) John Baines being unwell and unable to attend, I was honoured to be asked to lay the commemorative wreath on behalf of the RSLHG, alongside the Mayors, and I confess to being very aware of what was being remembered 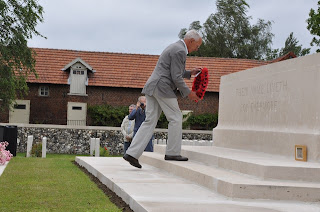 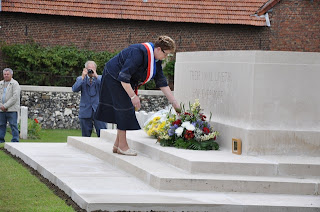 Last year (2010) we stayed until Sunday morning for a guided walk to the Front Line and a brief explanantion of the action by John Baines, during which it was easy to find these remnants of the battle lying on the ground, which is today privately owned farmland 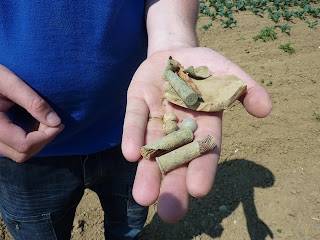 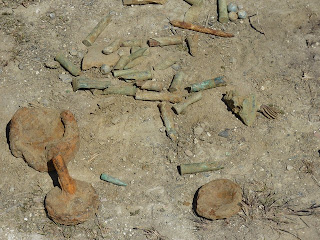 There was recently a TV programme about the finding of the bodies of very many Australian Soldiers at Fromelles, a few kilometers along the line, after another wasteful attack to try and divert German Troops away from the Somme where the offensive had stalled. This took place only 3 weeks after the Boar's Head - I ask you, how stupid was that?

We will be returning each year now until the one-hundredth anniversary of the Battle in 5 years time, and we shall be there, maybe on the site at 0200 to see what it feels like now
Finally, heartfelt thanks to M. Delehaye, the Mayor, and the whole communities of Richebourg for their respect and support for the ceremony and for the reception afterwards
Posted by Wellsy at 10:52

Wellsy
My website is at www.forewood.co.uk - it's awaiting overhaul - visit and you'll see why, but there's plenty to see there. Me?, I'm old enough to know better, unable presently to update and maintain my website, so using this blog instead. Sussex born, worked in local governement, redundant in 1999, done all sorts since. Came to St Margaret's in 1994 from Cheriton. As you can see from my photo, our 'ouse is a super place to see passing aeroplanes as well as birds. Local blogs by both Tony Morris - http://stmargaretsphotodiary.blogspot.com/ and Phil Smith http://mrphil-kearsneybirder.blogspot.com/ well worth following, too